Last week the final showdown for a Manila Major direct invite spot began, as well as the last LAN played on the 6.86 balance patch. Held in Manila, the same city as the next major, ESL One Manila was a big tournament with a lot of upsets and a much unexpected finale.

Starting from the ESL One Manila qualifiers, the tournament was already full of awesome storyl ines. On China, the final three teams were none of the most famous ones, and fighting for the spot were Wings Gaming, Vici Reborn and iG Vitality, with the first taking the finals and being the Chinese representative together with EHOME who got the direct invite for the event. For Europe, before most of the Post-Shanghai Major roster shuffles, Team Empire took the spot on an exciting final series against fan favorites Na’vi to join the last two directed invited teams, Secret and Liquid, who came from this region as well, and three spots were still to be taken.

After those qualifiers, the most predictable ones happened with not many surprises. For the Americas, compLexity took the spot without much risk, winning three straight series against Infamous, Digital Chaos and Elite Wolves. As a Filipino tournament, they had a separate qualifier from general South East Asia, and the region favorites, Mineski, won it all without sweat as well, only losing one out of eight games in total. Last but not least, the main South East Asian qualifiers were won by the big dominant force of the region on Fnatic, losing no games at all to get the last spot for the Main Event at Manila. 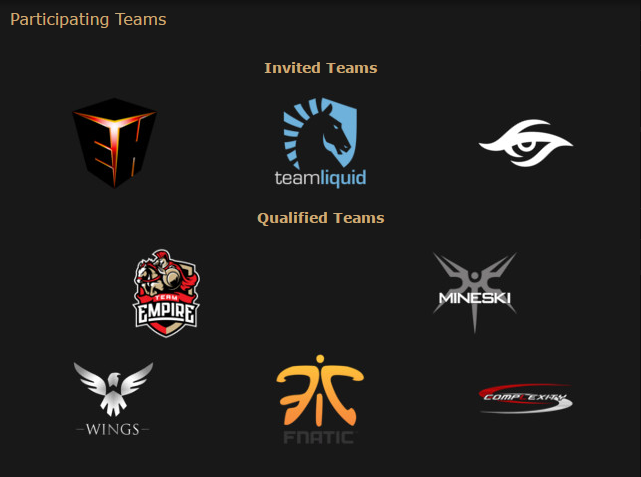 The Main Event started with a group phase, separating the teams in two groups of four, with top 2 in each group advancing to the single-elimination playoffs, played in a similar way to the Shanghai and Frankfurt majors, but with elimination instead of loser’s bracket.

This event marked the debut of the new Team Secret line-up, and a lot of expectations surrounded this all-star team with the recent aquisition of Arteezy and Universe from Evil Geniuses. The team fell two times to the uncertain Team Empire, who changed all of its members after qualifying for the tournament, and got eliminated right away from the tourney. EHOME was a big interrogation mark and had an early fall as well, being last on its group. Fnatic was the second team to qualify for this group against EHOME to play on the playoffs.

On the other group, favorites Liquid got an easy pass through and the biggest upset was Wings Gaming, who got over Mineski and a really close 2:1 series against compLexity to win the last spot for the playoffs, setting up for a really electric Main Event.

Pointing out before the Main Event starts: the crowd in Manila was probably one of the most passionate ever seen in the history of competitive Dota 2 and many players and personalities were impressed throughout the entire tournament.

As the main event started, Team Liquid played against Team Empire on the first semifinal to show why they were one of the favorite teams to win it all, rolling over Empire’s infamous Spectre draft in around 30 minutes, making it look like it’s easy to do. On the second semifinals, Wings Gaming had another hard and close series against Fnatic, and against the odds won the match to face Liquid on the finals. Notable to see on Wings Gaming is that even with a mostly stale metagame after almost 4 months, they showed a lot of variability on their drafts, getting most of the teams by surprise during the event.

For the last and most anticipated match of the tournament, Liquid went to face Wings with high hopes for taking the tournament, after getting just as close with a second place in Shanghai.

On the first game, Wings used a long lost duo combo, remainings of the TI3 era, with a aggressive Keeper of the Light/Phantom Lancer duo and a Bounty Hunter to go against the greedy Enigma pick by Liquid, punishing the not-so-strong laners Nature’s Prophet and Lone Druid picked by Liquid, and just before the 40-minute mark Wings won a decisive fight to close out the first game and get ahead in the finals.

For the second game, Liquid didn’t change much things on the draft, keeping the Enigma and mid Lone Druid, besides the notorious Jerax’s Earth Spirit, but as for Wings, they went to a lot more metagame centric tri-core with Slark, Invoker and Beastmaster. After a very favorable fight around the 20-minute mark, Wings got a good advantage, and proceeded to starve Liquid in the next 20 minutes, extending their lead and closing out the second game to solidify their lead on the best of five series.

For the third game, Wings didn’t hold back on the surprises, and with a big lead, took the risk of experimenting with some heroes, like the carry Venomancer and mid Alchemist. Liquid on the other side changed some things on the draft as well, but didn’t let go the greed and had a jungle Doom for Kuroky, playing a similar role as the last two games on the Enigma. The game was drawn for a long time without any of the teams taking a big lead, but as the Alchemist farm power started to kick out and he gifted Aghanim’s Scepters to his team, Wings started taking better trades in the mid and late-game fights, to finally punish Liquid once and for all, and take the series 3:0 to solidify the rise of the Chinese Dota after the VG Reborn victory at Starladder Invitational, and as of this post, being already directly invited for the upcoming Manila Major to show their strength against the bravest of international competition they ever faced.