So far, Season 2 of Fortnite has gone over fairly well with fans. Though some might be annoyed at the new Mythic Weapons, the additions to the battle royale are a marvel to behold. While the gameplay is, of course, important, it’s the creativity within the in-game menus that show how much work Epic Games put into this season. The community wondered why the developers kept delaying the start date and now it seems we know why. Gameplay aside, this could be some of Epic’s finest work when it comes to Fortnite.

Going over the revamped UI in Fortnite Season 2

Prior to Season 2, the lobby menu featured a solid User Interface (UI). However, with the new season, Epic Games truly outdid itself when it comes to the creativity and imagination behind the menu’s UI.

Though the regular lobby hasn’t changed much, it’s all of the new tabs inside of the menu that has players talking. From the Deadpool vent to the revamped challenge tab, it seems no aspect was left behind.

To start, Epic completely reworked the challenge tab. Since a majority of players complete the challenges to earn extra XP, this is where users spend a lot of time. As such, Epic Games made sure Fortnite featured an intuitive and functioning challenge screen.

Now, you can see exactly where you need to go for each challenge instead of trying to figure it out in a match. However, if that didn’t catch your eye, maybe the new Deadpool hangout will. Unlocked by purchasing the Battle Pass, you can now complete challenges for the Marvel anti-hero. To do so, you just need to head into his little vent in the new menu. 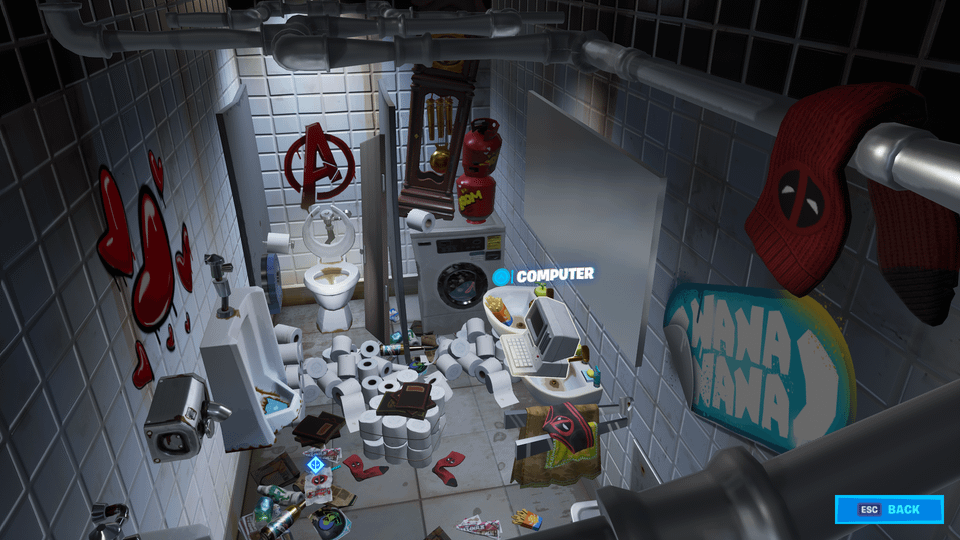 Every aspect of this tiny room is filled to the brim with details. The computer fully works as expected and there are tons of little easter eggs for fans to find. As previously stated, it seems that Epic Games spent hours and hours on every piece of the new UI.

Regardless of your feelings on Fortnite Season 2, you can’t deny how much thought Epic Games put into it. Hopefully, this trend continues with frequent updates and more communication in Season 2.