After an already strong showing on day one of the RLCSX EU Spring Regional 2, the underdogs of the tournament continue to impress on day two — this time by eliminating top teams such as Team Vitality, Dignitas and Guild.

The first day of the Spring Regional 2 saw many underdogs finish ahead of the favorites in their group. Even though some of these underdogs, such as WYLDE and German Amigos, did not survive day two, others even went as far as defeating the region’s titans. Newcomers Atlantide Waves pushed Dignitas into the lower bracket and qualified for Championship Sunday, while Team Vitality struggled their way through German Amigos, only to get eliminated by Solary in the following round.

Newcomers stealing the show in the RLCSX EU Spring Regional 2

Out of the top six in Europe, only two have made it to the final day of the second RLCSX EU Spring Regional: Team BDS and Top Blokes. Others, like Team Vitality, Dignitas and Guild, all fell in the lower bracket on day two.

Meanwhile, the unlikely teams are proving they can roll with the top of the RLCS. Rix.gg directly qualified for day three after a tight 3-2 win against White Demons, which went to three overtimes. In turn, White Demons took care of the more experienced players of Guild Esports in another five-game series in the lower bracket, which may go down as one of the worst series of all time due to many sloppy plays and own goals.

Atlantide Waves’ victory over Dignitas in the upper bracket was perhaps the most impressive victory of the day. With a 3-1 win, they quickly pushed aside the two-time world champion Jos “ViolentPanda” van Meurs and his mechanical monster teammates Joris “Joreuz” Robben and Jack “ApparentlyJack” Benton. And while Atlantide Waves lost to Team Vitality in the group stage, they finished ahead of them in the final standings. With their top-eight qualification, they leave three former world champions in the dust.

Team Queso and Solary also made it to the final day of the second RLCSX EU Spring Regional. The former first fell to Team Liquid in the upper bracket with a 3-0 loss, and Solary achieved about the only expected result of the day by losing to Team BDS (3-1). Neither of them had huge issues with their opponents in the lower bracket, however. Team Queso made quick work of TrainHard Esports with a 3-0 sweep, while Solary impressively shoved Team Vitality aside 3-1.

Team Queso and Solary can now make some good progress in the standings, as they are sitting in a shared ninth place, not far off the competition above them. With every team between them and fourth place already eliminated, a good result on Sunday will let them catch up and overtake their adversaries.Even Team Liquid, who are out of contention for an RLCSX world championship spot, seem to have found their stride this regional. In fact, their striker Aldin “Ronaky” Hodzic is leading the goal scoring charge with 1.4 goals per game, for a total of 28 goals according to stats tracked by Reddit user /u/FoolsLove.They were expected to perform well this season, but have underperformed since the start. Their season has mostly disappointed, but the roster is adamant to improve and wants to stick together. 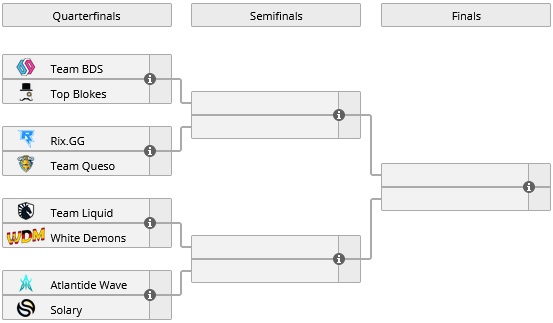 The RLCSX EU Spring Regional 2 continues on Sunday, March 28 with the top eight battling it out in a single-elimination bracket. Team BDS is the favorite, but perhaps one of the underdogs can pull off a true Cinderella story. Catch the action on Twitch and YouTube.

Michael Kloos
Michael Kloos is a Dutch esports journalist and enthusiast with a particular like of Rocket League and Valorant. He is also an avid fantasy/sci-fi reader and writer. He spends most of his time trying not to be in the real world.